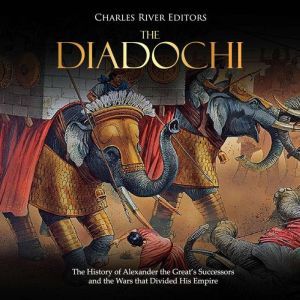 Diadochi, The: The History of Alexander the Great’s Successors and the Wars that Divided His Empire

On his deathbed, some historians claim that when he was pressed to name a successor, Alexander muttered that his empire should go “to the strongest”. Other sources claim that he passed his signet ring to his general Perdiccas, thereby naming him successor, but whatever his choices were or may have been, they were ignored. Alexander’s generals, all of them with the loyalty of their own corps at their backs, would tear each other apart in a vicious internal struggle that lasted almost half a century before four factions emerged victorious: Macedonia, the Seleucid Empire in the east, the Kingdom of Pergamon in Asia Minor, and the Ptolemaic dynasty in Egypt. During the course of these wars, Alexander’s only heir, the posthumously born Alexander IV, was murdered, extinguishing his bloodline for ever.

Although it was an incredibly important period in world history, it is sometimes as confusing as it is frustrating for historians because the allegiances of the generals changed constantly and historical sources are often biased in some regards and utterly lacking in others. Although none of these men were able to replicate Alexander the Great’s territorial success, a few carved out sizable empires and were able to establish long-lasting political dynasties. Ptolemy I brought Egypt back to a central position of power in the region, and Seleucus I built a strong empire on the ruins of ancient Babylonia, but other generals, such as Perdiccas, were killed early on in the fighting and slipped into relative obscurity. The general Lysimachus won control of Thrace and established a fairly important kingdom in that land, but when he died his successors all turned on and killed each other. Similarly, Cassander was a Macedonian general who was involved in the Diadochi Wars, and for a time it looked like he was going to be the biggest winner among the Macedonians.