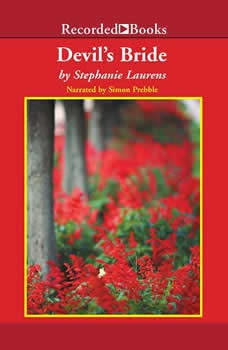 Bold, daring, larger-than-life heroes and feisty, intelligent heroines burst from the pages of Stephanie Laurens' exciting historical romance novels. Devil's Bride is rich with engaging plot and sensuous character development. Governess Honoria Wetherby values her independence. She would rather travel the world than marry and give some man control of her life. Then one stormy evening fate changes all her plans. She stumbles upon a mortally wounded young man in the woods. When the stranger dies, she is trapped in a cabin with his body and with his newly-arrived cousin, Devil, whom she soon learns is aptly named. He insists that their unchaperoned night together has compromised her honor, and, therefore she must marry him. Narrator Simon Prebble tantalizes listeners as he breathes life into these intriguing characters. Tension levels run high as Honoria plots to thwart Devil's marriage plans and tries to help him find his cousin's killer...the same madman who is now plotting to murder Devil.

I don't really know what to say. It's only ok. There are steamy parts, but the boring bla story rambles on and on. I think I'm really used to Kleypas. In contrary this author seems stretch the stories side out.

The Cynsters may be macho macho men, but seem to be dumb as a box of rocks. Ms Laurens made the killer so obvious I figured it out very quickly, but he almost had to confess before the light dawned for them. Not unusual for Regency heroines to be brainless, but its really not appealing in the heroes. Am I being sexist?

By Winters Light
The Cynster Novels

The Truth about Love
The Cynster Novels