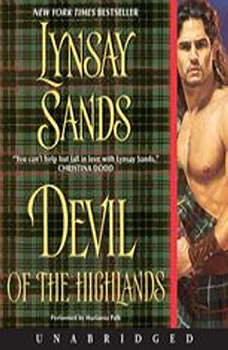 Devil of the Highlands

They call him the Devil . . .He is the most notorious laird of Scotland: fierce, cold, deadly . . . and maybe even worse. Yet Evelinde has just agreed to wed him. Anything, she thinks, is better than her cruel stepmother. Though Evelinde should be wary of the rumors, she can't help but be drawn to this warrior . . . for the Devil of the Highlands inspires a heat within her that is unlike anything she has ever known.They may call him whatever they wish, but Cullen, Laird of Donnachaidh, cares only for the future of his clan. He must find a wife, a woman to bear him sons and heed his commands. He has no need for beauty or grace, but one taste of his lovely bride's sweet lips and the sultry feel of her skin arouse an untamed passion. Perhaps there's more to marriage than he thought . . .

Devil of the Highlands
Historical Highlands #1

The Hellion and the Highlander
Historical Highlands #3