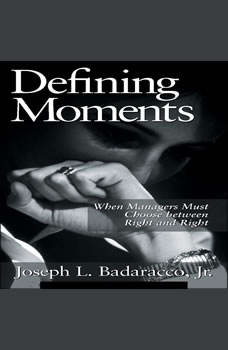 Defining Moments: When Managers Must Choose Between Right and Right

How do you lead the launch of a product you know will be extremely controversial? What should you do if a single parent on your staff is falling behind in his or her work? How should you respond if you are offered an opportunity at work solely because of your race or gender? This is a book about work choices and life choices, and the critical points, or defining moments, at which the two become one. A refreshing antidote to traditional feel-good, inspirational business ethics, it examines the right-versus-right conflicts that every business manager faces and presents an unorthodox yet practical way for you to think about and resolve them. When making hard professional decisions, managers often use personal values as a touchstone. Badaracco asserts, however, that resolving such dilemmas is not as simple as the "do the right thing" school of ethics would have you believe. Defining Moments reveals an alternative approach that will help you tackle the more complex and troubling question of what to do when doing the right thing requires doing something else wrong, or leaving another right thing undone. Drawing on philosophy, literature, and three case studies that reveal the increasing complexity today's managers face as their careers advance, Defining Moments provides tangible examples, actionable steps, and a flexible framework that you can use to make the choices that will shape not only your career, but your character. Compelling and absent of ethical jargon, this book gets to the core of what makes being a manager so difficult. For new and seasoned managers alike, Defining Moments explores what it means, and whether it's even possible, to be a successful manager and simultaneously a thoughtful, responsible human being.