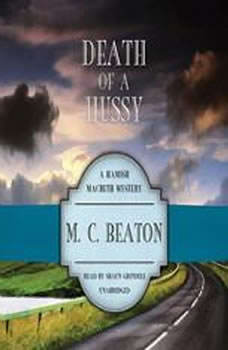 Death of a Hussy

A classic title from M.C. Beatons New York Times bestselling Hamish Macbeth series About the best that can be said of wealthy Maggie Baird is that inside her middle-aged body, there still beats the heart of a beautiful tart. So when her car catches fire with Maggie in it, there are five likely suspects right on the premises of her luxurious Highlands cottage. Lochdubh police constable Hamish Macbeth has to question Maggies timid niece and four former lovers, one of whom Maggie had intended to pick for her husband. All five are equally poorwith ample motive and opportunity to monkey with Maggies car. Now to find the killer, the astute lawman must apply his extraordinary insight into human nature. But when the evidence appears to point to the wrong person entirely, Hamish must dig down deep to stop the real murderers escape.

The Man in the Brown Suit
by Agatha Christie

Pretty, young Anne came to London looking for adventure. In fact, adventure comes looking for her—and finds her immediately at Hyde Park Corner tube station. Anne is present on the platform when a thin man, reeking of mothballs, loses his ba...

Towards Zero
by Agatha Christie

One of Agatha Christie’s own ten favorite novels, Towards Zero puts Superintendent Battle and Inspector Leach on the case as they investigate the murder of an elderly widow.What is the connection among a failed suicide attempt, a wrongfu...

Dashing detective Lord Peter Wimsey is caught up in the murder trial of mystery writer Harriet Vane. Her fiance has died of poisoning exactly as described in one of Harriet's novels-so naturally she is the prime suspect. As Peter looks on, he not on...

Agatha Raisin and the Case of the Curious Curate
by M. C. Beaton

Amateur sleuth Agatha Raisin is going through a man-hating phase after being left by her husband, is bored with tottering around Carsley, and wishes men would just sod off, so she is unmoved by news of a captivating new curate. But when she meets th...

From the author of the Agatha Raisin television series...DEATH OF YESTERDAY: A Hamish Macbeth MysteryWhen a local woman tells Sergeant Hamish Macbeth that she doesn't remember what happened the previous evening, he doesn't begin to worry. She had b...