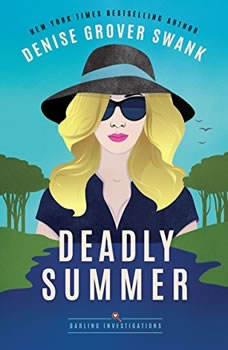 New York Times bestselling author Denise Grover Swank gives a former TV star one more shot at fame—and it proves to be a killer comeback…Ten years ago, Summer Butler was television’s most popular teenage sleuth. Since then, she’s hit—what gossip sites just love to call—the gutter. Nearly bankrupt, betrayed, estranged from her greedy mother, and just about unemployable, she’s coaxed into that desperate haven for has-beens: reality TV.Winging it as a faux PI, she’ll solve off-the-cuff mysteries in her hometown of Sweet Briar, Alabama. For added drama, there’s police chief Luke Montgomery, inconveniently Summer’s first and only love.It’s when Summer stumbles upon a very real corpse that Darling Investigations takes an unexpected twist. The growing list of suspects is a big draw to viewers, but the reality is that Summer doesn’t know whom she can trust. Someone has written this killer new scene especially for her, and unless Summer gives the role everything she’s got, it could be her last…