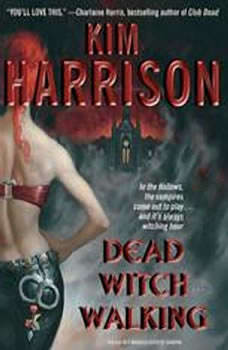 Rachel Morgan is a runner with the Inderland Runner Services, apprehending law-breakers throughout Cincinnati. She's also a witch, one of the many Inderlanders who revealed themselves after a genetically engineered virus wiped out 50 percent of humanity. Witches, warlocks, vampires, werewolves—the creatures of dreams and nightmares have lived beside humans for centuries, hiding their powers. But now they've stopped hiding, and nothing will be the same. On the run with a contract on her head, Rachel reluctantly teams up with Ivy, Inderland's best runner…and a living vampire. But this witch is way out of her league, and to clear her name, Rachel must evade shape-changing assassins, outwit a powerful businessman/crimelord, and survive a vicious underground fight-to-the-death…not to mention her own roommate! Fun, sassy, filled with action, humor, and romance, Dead Witch Walking is the perfect summer listen for anyone who likes vampires, paranormal fantasy, romance, or just a great beach book.

Lord of Chaos
by Robert Jordan

The Wheel of Time ® is a PBS Great American Read Selection! Now in development for TV! Since its debut in 1990, The Wheel of Time® by Robert Jordan has captivated millions of readers around the globe with its scope, originality, and comp...

“Hilarious, always inventive, this is a book for all, especially uptight English teachers, bardolaters, and ministerial students.” —Dallas Morning NewsFool—the bawdy and outrageous New York Times bestseller from the unstoppa...

Now a major motion picture starring Matthew McConaughey and Idris Elba The next-to-last novel in Stephen King's seven-volume magnum opus, Song of Susannah is a fascinating key to the unfolding mystery of the Dark Tower.To give birth to her "chap," ...

Every Which Way but Dead
Hollows #3