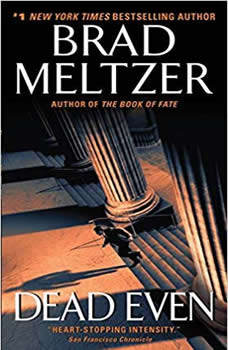 Dead Even: Booktrack Edition adds an immersive musical soundtrack to your audiobook listening experience! *In his New York Times runaway bestseller The Tenth Justice, Brad Meltzer asked the insidious question: How much can you really trust your friends? Now he ups the tension, and the ante, in a new legal thriller that poses the most chilling dilemma of all... Sara Tate, Manhattan district attorney, has grabbed a case that could make her career. She's smart, tough, and sure to get a conviction...until Jared, her husband and a powerful defense attorney, is hired by the other side. But Sara doesn't know Jared has been warned to get his client off or she will be killed. Hiding desperate motives, the couple begins a vicious battle in court and at home. For Sara has a terrible secret too...and both soon face an unthinkable truth: No matter who wins, the other may die. *Booktrack is an immersive format that pairs traditional audiobook narration to complementary music. The tempo and rhythm of the score are in perfect harmony with the action and characters throughout the audiobook. Gently playing in the background, the music never overpowers or distracts from the narration, so listeners can enjoy every minute. When you purchase this Booktrack edition, you receive the exact narration as the traditional audiobook available, with the addition of music throughout.