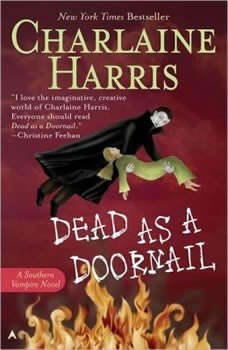 Dead as a Doornail

New York Times and USA Today best-selling author Charlaine Harris has won an Anthony Award for her one-of-a-kind Sookie Stackhouse mystery series. Sookie—a Louisiana cocktail waitress, skilled telepath, and friend to vampires—has a dedicated fan base that grows larger every day. When Sookie realizes a deadly sniper might target her were-panther brother, she knows she must stop the mysterious assassin before the next full moon.

Unabridged CDs, 15 CDs, 19 hours Read by Kimberly Alexis In Blue Moon, Anita Blake's ex, high school teacher and sexy lycanthrope Richard, has been thrown in jail for attempted rape. With an entourage of vampires and werewolves, even this preterna...

“I wouldn’t miss a Kim Harrison book for anything.”—Charlaine Harris, author of the Sookie Stackhouse novels Black Magic Sanction is the most complex and emotionally charged adventure yet in author Kim Harrison’s ...

The Characters are great. The story set is very unique and entertaining. I love this series. I listen to it over and over. It is funny and you can't help but fall in love with Sookie's character and wit. The narrator's voice definitely works with this series. I can't wait for the HBO Series - True Blood.