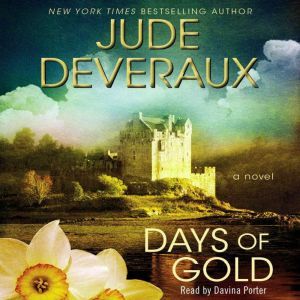 Now from Encore— New York Times bestselling author Jude Deveraux returns to the sweeping historical romance beloved by her fans in this dazzling story set in 1766 and spanning two continents. Angus McTern is respected by the men of his clan and adored by the women. He takes his duties as laird seriously and has everything he wants in life—until Edilean Talbot shows up. Breathtakingly beautiful and born of privilege, Edilean needs Angus’s help to reclaim the gold she inherited from her father. The treasure is bound for America, but when Angus tries to seize it, he’s accused of kidnapping and theft and has to escape with Edilean to the new country. There they discover almost insurmountable obstacles, and a love as wild and free as the land itself.The second book in the multi-generational Edilean series that began with the contemporary novel Lavender Morning, Days of Gold is filled with humor, passion, exquisite detail, and pulse-pounding adventure. Stirring and masterfully rendered, it’s the kind of epic story that so many novelists aspire to write, but only Jude Deveraux can create so well.

I like Jude Deveraux but this read like my 5th grader wrote it. the sentences were choppy and stilted. I thought it would get better as i read along but it did not. I could not get past the 3rd chapter. I wonder if someone else did write it.