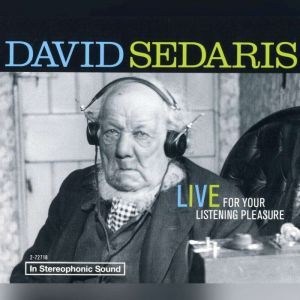 If you were lucky enough to have caught a performance on David Sedaris's most recent sold-out, 34-city tour, you already know that David Sedaris Live For Your Listening Pleasure is a must-have album! If you didn't hear it live and in person, then you're in for a treat-hilarious brand-new recordings from performances in Denver, New York, Durham, LA, and Atlanta, in one convenient audiobook collection, on sale November 24 for only $17.98.From the bold feral rabbits of his French backyard to the eating habits of a carnivorous bird Down Under, Live For Your Listening Pleasure takes listeners on a veritable tour of natural wonders, beginning with a fable, "Cat and Baboon," and moving on to the peculiarly American habitat of the "big-box" store."Sedaris's sparkling essays always shimmer more brightly when read aloud by the author. And his expert timing, mimicry and droll asides are never more polished than during live performances in front of an audience." Publishers Weekly, Starred Review - When You Are Engulfed in FlamesTrack Listing:1: Cat and Baboon (Temple Hoyne Buell Theatre in Denver, Colorado)2-5: Author, Author (Avery Fisher Hall at Lincoln Center for the Performing Arts in New York City)6-8: Innocence Abroad (Durham Performing Arts Center, in Durham, North Carolina)9-13 Laugh, Kookaburra (Royce Hall, UCLA in Los Angeles, California)14-16: Diary Entries (Cobb Energy Performing Arts Centre in Atlanta, Georgia)