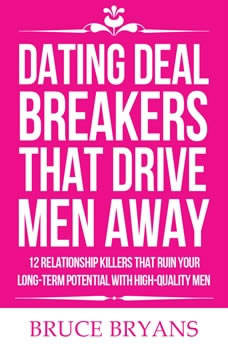 Goodhearted, highly masculine, relationship-minded men will do everything in their power to avoid falling in love with a woman that could make their life a living hell. And because of this one simple fact, guys like this are very discriminating when assessing a woman’s long-term relationship potential. When evaluating a woman’s long-term relationship potential, high-quality men place greater attention on the quality (or lack thereof) of her personal character, as well as those things that have a direct or indirect influence upon her character (such as the people, places, and things in her life). This audiobook was designed to provide women with an inside look at the most common dating red flags that high-quality men consider “deal-breakers”, the kind of deal-breakers that compel them to stop pursuing a woman, ignore her texts (and phone calls), and eventually blow up a budding relationship. In this audiobook, you're going to learn: • The one area of your life that high-quality men are DEEPLY concerned about, and how they secretly use it to judge your character (or lack thereof). • How to easily maintain a DEEP emotional connection to a man by avoiding one simple relationship mistake. (Hint: This is the one mistake many women unknowingly struggle with.) • An irritating habit that causes high-quality men to stop pursuing a woman almost INSTANTLY. • How to be a high-value woman in the MOST important area of a man’s life and make him see you as potential "Wife Material." • A "man-repelling" female attitude that DRIVES good men away, and pushes them into the arms of "lesser" women. • How to avoid KILLING a man’s natural desire to please you by giving him the one thing ALL men desperately crave but would NEVER ask for from a woman. • And much, much more... Get started now and discover how to avoid the biggest relationship killers that ruin your chances with higher quality men.

Don't Be a Douchebag: Online Dating Advice I Wish Men Would Take
by Cassie Leigh

Online Dating Is Hard…Especially For Men You have to put yourselves out there, reaching out to woman after woman, hoping for some sort of response, handling rejection after rejection. It's frustrating. And sometimes you just want to know w...

You do not have to listen to a whole book to get steamy scenes or sexual encounters, just start listening and instantly you are experiencing sexual pleasure in your ears. Sex is a beautiful expression, and the pleasure can be unforgettable if the ri...

How to Get a Date Worth Keeping
by Henry Cloud

It stinks, doesna€™t it. But what can you do to fix it? More than youa€™ve ever imagined. You can put an end to the datelessness. Starting todaya€”right nowa€”you can begin a journey that will bring fun an...

The #1 bestselling pioneer of "fratire" and a leading evolutionary psychologist team up to create the dating book for guys Whether they conducted their research in life or in the lab, experts Tucker Max and Dr. Geoffrey Miller have spent the last 2...

How to Be Single and Happy
by Psy.D. Taitz

An upbeat guide for single women on how to navigate the crazy world of modern dating and live their best lives, whether single or coupled It's easy to fall into a bad relationship with dating today, especially for single women. From living in fear o...

Calling in "The One"
by Katherine Woodward Thomas

Are you frustrated by stymied relationships, missed connections, and the loneliness of the search for someone to spend the rest of your life with? Are you ready, instead, to find “The One”? In Calling in “The One,” Katherine ...

Christy Miller Series Book #8It’s Christmastime, and Christy has lots going on with school, family, work, and maybe, just maybe, going to the Rose Bowl Parade with a bunch of friends. If only she could answer Uncle Bob’s tough questions ...

Bulletproof Seduction: How to Be the Man That Women Really Want
by Craig Beck

There are nearly three billion women in the world, so why are you not getting as much amazing sex are you really want? The truth is most men suck at attracting women because they don’t understand how women think and feel. If you don’...