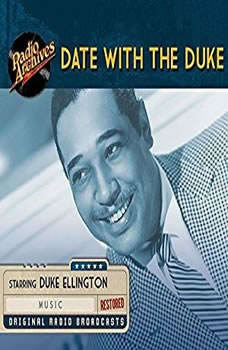 Date With the Duke

Edward Kennedy 'Duke' Ellington (1899 - 1974) was and still remains a powerfully influential figure in the world of music. Whether it was in jazz, popular song, big bands, or modern classical-form compositions, Ellington's orchestras always led the way, featuring stylish and innovative arrangements, memorable performances by a wide range of talented vocalists and solo performers, and the sheer showmanship of their handsome and charismatic leader. Radio always played a significant role in the popularity of Ellington's orchestras, whether it was the early 1930s weekly broadcasts from the Cotton Club, 1940s late-night remotes from ballrooms and hotels, or a string of guest appearances on popular network variety shows. However, toward the end of World War II, to promote the Seventh War Loan drive, the United States Treasury Department sponsored a series of broadcasts featuring live in-person performances by Ellington and his orchestra.

The Best Horror of the Year, Volume 4...
by Various Authors