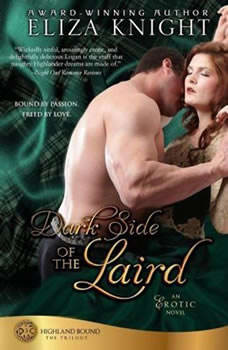 Dark Side of the Laird

When the damaged and tormented Emma first meets the equally broken Logan, they embark on a torrid affair that irrevocably changes their lives. Emma has sacrificed her entire being, and just when she thinks Logan is willing to do the same, he holds back. In order to keep her, Logan must gain permission to marry from the one man he's sought to avoid: his brother, the King. His appeal is denied, and Logan is sent to the dungeon. Fearing that her lover is dead, Emma decides once and for all that she must leave history where it belongs and return to the present. She and Logan have always been strongest when together, but now Emma must find the courage on her own to see her fate fulfilled—and Logan returned to her. Contains mature themes.