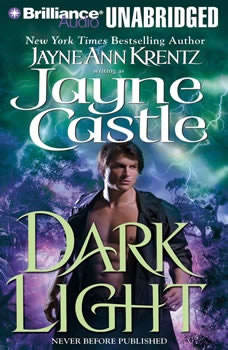 Everything is different underground. Just ask the residents of Harmony, a futuristic world where alien catacombs can lead you astray –- and where psychic senses spark out-of-this-world passion... Reporter Sierra McIntyre's stories on Crystal City's ghost hunters –- and their mysterious guild –- have earned her tabloid a bit of respect. And they've allowed her to clothe her dust-bunny companion, Elvis, in rock-and-roll style. It helps that she has mega-rez intuition to fall back on... Especially when she interviews Ghost Hunter Guild boss John Fontana about the disappearances of retired, homeless hunters. She doesn't want to trust the physically and psychically powerful man, but her senses –- and Elvis –- give her the green light. To uncover the conspiracy within his own organization, Fontana proposes...marriage. And though it's purely a business arrangement, there's nothing pure about the attraction that sizzles between them...

Sierra McIntyre is a reporter for Crystal City's Curtain and she believes there's something to ex ghost hunters being abducted by aliens. John Fontana is the new Guild boss and Sierra has an exclusive interview with him. During thier interview he asks Sierra to enter into a Marriage of Convenience, which she accepts. Then things start happening. I really enjoyed this chapter of Jayne Castle's Harmony. Sierra and Fontana were meant for eachother. Then there is Elvis, the dust bunny. I love these creatures that Ms. Castle has come up with. They make the whole series.