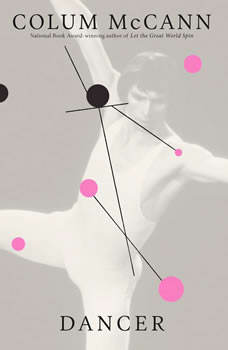 Taking his inspiration from biographical facts, novelist Colum McCann tells the erotically charged story of the Russian dancer Rudolf Nureyev through the cast of those who knew him.

There is Anna Vasileva, Rudi's first ballet teacher, who rescues her protégé from the stunted life of his provincial town; Yulia, whose sexual and artistic ambitions are thwarted by her Soviet-sanctioned marriage; and Victor, the Venezuelan street hustler, who reveals the lurid underside of the gay celebrity set. Spanning four decades and many worlds, from the horrors of the Second World War to the wild abandon of New York in the eighties, Dancer is peopled by a large cast of characters, obscure and famous: doormen and shoemakers, nurses and translators, Margot Fonteyn, Eric Bruhn and John Lennon. And at the heart of the spectacle stands the artist himself, willful, lustful, and driven by a never-to-be-met need for perfection.

Some authors have such busy bios that they are just exhausting to even read. Colum McCann is one such author. He was born in Dublin, Ireland in 1965 and began his writing career at The Irish Press. In every sense, McCann is considered to be an international artist. He has crossed the United States by bicycle, he has worked with a juvenile delinquent wilderness camp in Texas, and spent a year and a half in Japan with his wife Allison. His novels are reflective of his world travels and his many awards. He literally receives awards for his work from being a member of the American Academy of the Arts to election to the Irish Arts Academy.........winning a 2010 Best Novel Award in China to an Oscar nomination in the USA. He has won awards for his novels everywhere in between.

McCann received his Oscar nomination for his short film, "Everything in this Country Must", directed by Gary McKendry. His novel, "Let the Great World Spin", has had it's film rights purchased by J. J. Abrams, who was the creator of "Lost". McCann co-founded the global charity "Narrative 4", which brings together challenged youth from various places in the world to exchange their stories. The hope is that these youth will go back to help make changes in their respective communities.

McCann's works include: Let the Great World Spin, Thirteen Ways of Looking, Letters to a Young Writer, and his newest, Apeirogon. They are among his seven novels and three collections of stories which have been published.

To quote McMann, "I believe in the democracy of story-telling.... I love the fact that our stories can cross all sorts of borders and boundaries........being able to tell a story or listen to a story is the only thing that can trump life itself". McCann lives in New York with his wife Allison and their three children.