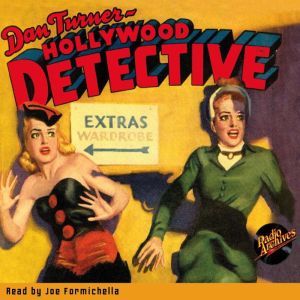 Dan Turner was a typical hardboiled private eye, who worked in the Hollywood area of Los Angeles. Most of the stories are set in and around the film studios, and focus on crimes involving people in the movie business film stars, stuntmen, producers, agents, extras and an endless array of glamorous female starlets. The Dan Turner stories were notorious for their emphasis on sexual content, although this was generally implied rather than described explicitly. A large number of the Dan Turner stories were written by Bellem himself, who had a good inside knowledge of Hollywood having worked as a film extra. The Hollywood Detective magazine also featured a Dan Turner comic strip, drawn by Max Plaisted. All the Dan Turner stories are written in the first person, in a racy, slang-ridden style that gives them a unique flavor. Guns are never guns but roscoes, and they always go ka-chow!. A woman is never simply a woman but a dame, frail, quail, wren or, if particularly attractive, a doll or cutie. The murders, follow an exact, rigid pattern, almost like the ritual of a bullfight or a Chinese play. Many of the murder scenes from several different Dan Turner mysteries, bear a remarkable similarity. The murder scenes always involve a roscoe which says Ka-chow!, Chow! Chow!, or Wh-r-r-ang! After the body hits the floor, Dan Turner always comments that the victim is as dead as an iced catfish or as dead as vaudeville or as dead as a smoked herring. The only other recurring character in the series was his pal, and sometime-rival, Lieutenant Dave Donaldson of the homicide squad, whose chief purpose seemed to be to get the bodies hauled away. The six stories and two features was originally published in the March, 1943 issue of Dan Turner, Hollywood Detective magazine and is read by Joe Formichella.