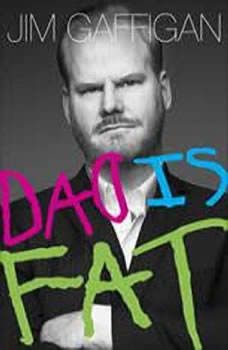 Jim Gaffigan never imagined he would have his own kids.

Though he grew up in a large Irish-Catholic family, Jim was satisfied with the nomadic, nocturnal life of a standup comedian, and was content to be "that weird uncle who lives in an apartment by himself in New York that everyone in the family speculates about." But all that changed when he married and found out his wife, Jeannie "is someone who gets pregnant looking at babies."

Five kids later, the comedian whose riffs on everything from Hot Pockets to Jesus have scored millions of hits on YouTube, started to tweet about the mistakes and victories of his life as a dad. Those tweets struck such a chord that he soon passed the million followers mark. But it turns out 140 characters are not enough to express all the joys and horrors of life with five kids, so hes' now sharing it all in Dad Is Fat.

From new parents to empty nesters to Jim's twenty-something fans, everyone will recognize their own families in these hilarious takes on everything from cousins ("celebrities for little kids") to growing up in a big family ("I always assumed my father had six children so he could have a sufficient lawn crew") to changing diapers in the middle of the night ("like The Hurt Locker but much more dangerous") to bedtime (aka "Negotiating with Terrorists").

Dad is Fat is sharply observed, explosively funny, and a cry for help from a man who has realized he and his wife are outnumbered in their own home.

Wherever You Go, There They Are
by Annabelle Gurwitch

A hysterically funny and slyly insightful new collection of essays from New York Times bestselling author Annabelle Gurwitch, about her own family of scam artists and hucksters, as well as the sisterhoods, temporary tribes, communities, an...

No Wonder My Parents Drank
by Jay Mohr

Comedian and actor Jay Mohr’s humorous memoir about the lunacy that ensues after reaching the blessed stage of parenthood. Waxing poetic about circumcision and the benefits of the carpool lane, Mohr spins theories on spanking and ponders quest...

"I loved it." —Ann Patchett The bestselling author of American Housewife ("Dark, deadpan and truly inventive." --The New York Times Book Review) is back with a fiercely funny collection of essays on marriage and manners, thank-you no...

It Takes Balls
by Josh Wolf

Josh Wolf--one of the stars and writers of Chelsea Lately and After Lately--delivers a hilarious collection of essays that reminds us all what it takes to conquer fatherhood without sacrificing manhood. Struggling to make it as a stand-up comic di...

I Heart My Little A-Holes
by Karen Alpert

Popular blogger Karen Alpert shares her hysterical take on the many "joys" of parenting—I Heart My Little A-Holes is full of hilarious stories, lists, thoughts and pictures that will make you laugh so hard you'll wish you were wearing a diape...

Toddlers Are A**holes
by Bunmi Laditan

Toddler a**holery is a normal part of human development—not unlike puberty, except this stage involves throwing food on the floor and taking swings at people who pay your way in life. For parents of toddlers, it's a "you better laugh so you do...

My Inappropriate Life
by Heather McDonald

In her hilarious New York Times bestseller You’ll Never Blue Ball in This Town Again, Heather McDonald recounted her adventures as an unwilling virgin in Hollywood. Now happily married with three wonderful kids, she shows that life as a grown-...

In their highly-anticipated first book, the hilarious mom duo with millions of followers explores all the ridiculous shit you’re expected to do to keep multiple humans alive and happy-ish, and celebrates the love for the friends who get you t...