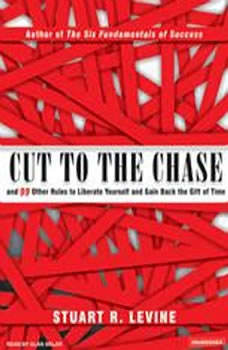 Cut to the Chase: And 99 Other Rules to Liberate Yourself and Gain Back the Gift of Time

Just before CEO and consultant Stuart Levine appeared on the Today Show to promote his bestselling book The Six Fundamentals of Success, cohost Matt Lauer said to him, "You know what really drives me nuts? When people come into my office for a five-minute conversation and an hour later, they're still there! Why can't they cut to the chase?" Lauer's question echoed the concerns Levine has heard from business people and top executives at every level: How can I get more done? How can I stay focused? How can I condense my workday so that I can become more successful and yet spend more time with my family? Levine's answer? By cutting to the chase. The people who thrive at work are the ones who make best use of their limited time and energy. They approach each task with clarity and purpose. They prioritize. They don't allow others to waste their time. In Cut To The Chase, Levine has distilled the expertise of hundreds of CEOs, managers, and professionals into 100 concise, invaluable lessons about how to get to the point, stay on track, and be more successful in everything you do. In an age where we spend more hours at work than ever before, Cut To The Chase is the indispensable guide to making the most of your time so that you can lead a happier, more balanced life.