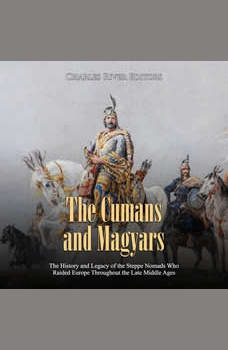 Cumans and Magyars, The: The History and Legacy of the Steppe Nomads Who Raided Europe Throughout the Late Middle Ages

Before the Mongols rode across the steppes of Asia and Eastern Europe, the Cumans were a major military and cultural force that monarchs from China to Hungary and from Russia to the Byzantine Empire faced, often losing armies and cities in the process. The Cumans were a tribe of Turkic nomads who rode the steppes looking for plunder and riches, but they rarely stayed long after they got what they wanted.

Of all the steppe peoples in the medieval period, perhaps none were more important to European history than the Magyars. Like the Huns and Avars before them and the Cumans and Mongols after them, the Magyars burst into Europe as a destructive, unstoppable horde, taking whatever they wanted and leaving a steady stream of misery in their wake. They used much of the same tactics as the other steppe peoples and lived a similar, nomadic lifestyle. The Magyars also had many early cultural affinities with other steppe peoples, following a similar religion and ideas of kingship and nobility, among other things. That said, as similar as the Magyars may have been to other steppe nomads before and after them, they were noticeably different in one way: the Magyars settled down and became a part of Europe and Western Civilization in the Middle Ages.