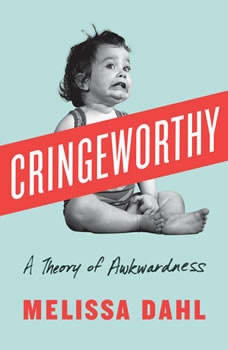 Cringeworthy: A Theory of Awkwardness

New York magazine's "Science of Us" editor explains the compelling psychology of awkwardness, and asks: what if the moments that make us feel most awkward are actually valuable?

Have you ever said goodbye to someone, only to discover that you're both walking in the same direction? Or had your next thought fly out of your brain in the middle of a presentation? Or accidentally liked an old photo on someone's Instagram or Facebook, thus revealing yourself to be a creepy social media stalker?

Melissa Dahl, editor of New York magazine's "Science of Us" website, has. After a lifetime of cringing, she became intrigued by awkwardness: a universal but underappreciated emotion. In this witty and compassionate book, Dahl explores the oddest, cringiest corners of our world. She chats with strangers on the busy New York City subway, goes on awkward friend dates using a "Tinder-for-friendship" app, takes improv comedy lessons, and even reads aloud from her (highly embarrassing!) middle school diary to a crowd of strangers.

After all of that, she realizes: Awkward moments are opportunities to test yourself. When everyone else is pretending to have it under control, you can be a little braver and grow a little bigger--while remaining true to your awkward self. And along the way, you might find that awkward moments unite us in our mutual human ridiculousness.