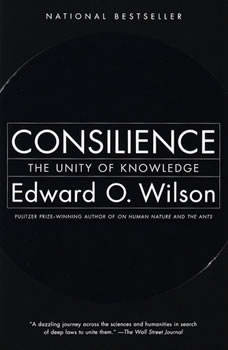 Consilience: The Unity of Knowledge

"A dazzling journey across the sciences and humanities in search of deep laws to unite them." --The Wall Street Journal

One of our greatest living scientists--and the winner of two Pulitzer Prizes for On Human Nature and The Ants--gives us a work of visionary importance that may be the crowning achievement of his career. In Consilience  (a word that originally meant "jumping together"), Edward O. Wilson renews the Enlightenment's search for a unified theory of knowledge in disciplines that range from physics to biology, the social sciences and the humanities.

Using the natural sciences as his model, Wilson forges dramatic links between fields. He explores the chemistry of the mind and the genetic bases of culture. He postulates the biological principles underlying works of art from cave-drawings to Lolita. Presenting the latest findings in prose of wonderful clarity and oratorical eloquence, and synthesizing it into a dazzling whole, Consilience is science in the path-clearing traditions of Newton, Einstein, and Richard Feynman.