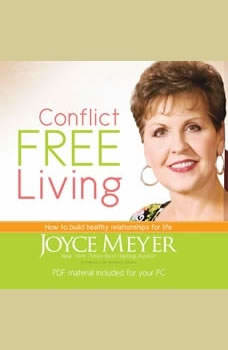 Conflict Free Living: How to Build Healthy Relationships for Life

Why is life so difficult?&#160; Interpersonal conflict is causing serious damage and difficulties in our lives. Its destructive effects are straining marriages, embittering our children, and causing discord in our churches&#151;even our daily commute is often affected by hostility and aggression. What if things could be different? What if every area of your life&#151;yes, even your morning commute&#151;could be free from conflict and strife? What if ALL of your relationships could be filled with love and excitement? Best-selling author Joyce Meyer wants you to know that this is possible! In Conflict-Free Living, she weaves together personal experiences with solid instruction from the Bible to demonstrate clearly how you can experience healthy, happy relationships in your own life. Open your eyes to the destructive effects of conflict in your life and the lives of your loved ones, and discover the joy of a peaceful life today!

Break Out!
by Joel Osteen