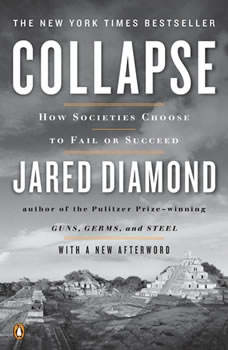 In Jared Diamond’s follow-up to the Pulitzer Prize–winning Guns, Germs and Steel, the author explores how climate change, the population explosion, and political discord create the conditions for the collapse of civilization.

Environmental damage, climate change, globalization, rapid population growth, and unwise political choices were all factors in the demise of societies around the world, but some found solutions and persisted. As in Guns, Germs, and Steel, Diamond traces the fundamental pattern of catastrophe, and weaves an all-encompassing global thesis through a series of fascinating historical-cultural narratives. Collapse moves from the Polynesian cultures on Easter Island to the flourishing American civilizations of the Anasazi and the Maya and finally to the doomed Viking colony on Greenland. Similar problems face us today and have already brought disaster to Rwanda and Haiti, even as China and Australia are trying to cope in innovative ways. Despite our own society’s apparently inexhaustible wealth and unrivaled political power, ominous warning signs have begun to emerge even in ecologically robust areas like Montana.

Brilliant, illuminating, and immensely absorbing, Collapse is destined to take its place as one of the essential books of our time, raising the urgent question: How can our world best avoid committing ecological suicide?

Think you've got it all figured out? Think again.Neal Boortz has been edifying, infuriating, and entertaining talk radio audiences for more than three decades with his blend of straight talk and twisted humor. In Somebody's Gotta Say It, Boortz war...

Sleeping With the Devil
by Robert Baer

Former CIA operative Robert Baer examines the dangers behind America's collaboration with Saudi Arabia. Nominally based on a "harmony of interests" - the Saudis sold their oil to the American government very inexpensively - what we offered in exchan...

Our Endangered Values
by Jimmy Carter

In Our Endangered Values, Jimmy Carter offers a personal consideration of "moral values" as they relate to the important issues of the day. He puts forward a passionate defense of separation of church and state, and a strong warning about where the ...

The Audacity of Hope
by Barack Obama

In July 2004, Barack Obama electrified the Democratic National Convention with an address that spoke to Americans across the political spectrum. Now, in The Audacity of Hope, Senator Obama calls for a different brand of politics–a politics for...