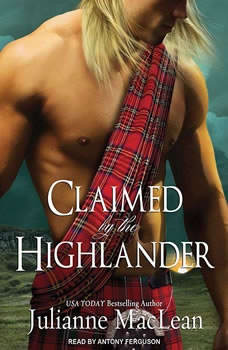 Claimed by the Highlander

With his tawny mane, battle-hewn brawn, and ferocious roar, Angus "The Lion" MacDonald is the most fearsome warrior Lady Gwendolen has ever seen—and she is his most glorious conquest. Captured in a surprise attack on her father's castle, Gwendolen is now forced to share her bed with the man who defeated her clan. But, in spite of Angus's overpowering charms, she refuses to surrender her innocence without a fight.With her stunning beauty, bold defiance, and brazen smile, Gwendolen is the most infuriating woman Angus has ever known—and the most intoxicating. Forcing her to become his bride will unite their two clans. But conquering Gwendolen's heart will take all his skills as a lover. Night after night, his touch sets her on fire. Kiss after kiss, his hunger fuels her passion. But, as Gwendolen's body betrays her growing love for Angus, a secret enemy plots to betray them both.

Sinful in Satin
by Madeline Hunter

Seduced by the Highlander
by Julianne MacLean

The fierce and powerful Laird of War Lachlan MacDonald has conquered so many men on the battlefield—and so many women in the bedroom—that he is virtually undefeated. But one unlucky tryst with a seductive witch has cursed him forever. No...

Captured by the Highlander
by Julianne MacLean

Lady Amelia Templeton would rather die than surrender to a man like Duncan MacLean. He is the fiercest warrior of his clan—her people's sworn enemy—and tonight he is standing over her bed. Eyes blazing, muscles taut, and battle axe gleam...

Claimed by the Highlander
Highlander #2

Captured by the Highlander
Highlander #1

Seduced by the Highlander
Highlander #3