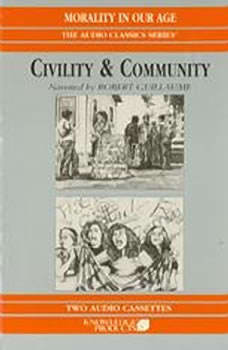 Civility, which comes to us from the Latin word for citizen, includes not only the notions of courtesy and politeness, but also such matters as social relationships and proper conduct in human relationships. For some, civility is the essential glue that holds society together, and it involves such important issues as friendship, altruism, responsibility, dignity, and justice. Aristotle saw civility as a form of friendship, which he understood as a mutual feeling of good will. Aristotle believed that humans are capable of promoting another persons interest without regard for our own, and he ranked friendships according to their degree of intimacy and commitment. Character friendship may be purely selfless; advantage friendship is a mixture of selfinterest with perhaps some altruism, and this is the basis of civil interaction. By contrast, Thomas Hobbes believed that humans are incapable of sympathy with the interests of others; he said that we are ultimately motivated by selfinterest in all of our acts. But recent experiments and theoretical developments have supported the view of David Hume, who believed that humans are naturally sympathetic, with our benevolence (or willingness to act selflessly) guided by such things as reason and custom. Amid many wrenching claims that todays society is marked by lawlessness and a collapse of moral values, its important to reduce sweeping historical generalizations to specific comparisons of time and place. Colonial America, for example, was viewed in retrospect as a coarse age by the more proper nineteenthcentury Americans yet these same nineteenthcentury Americans exhibited a great deal of intolerance, and they experienced lawlessness especially in mob violence (e.g. lynchings). In general, specific historical comparison, makes it clear that lawlessness, intolerance, and standards of decorum tend to fluctuate in complex and interdependent ways. Modern American society is marked by a high degree of mobility, a decline in voluntary civic activities, and an emphasis on rights (i.e. what others owe me). The result is rootlessness and detachment from family and friends. Higher crime rates, chiefly among youth, show a strong statistical correlation with lack of selfcontrol. And moral disputes are often marked by dogmatism, the inability or unwillingness to see the moral force behind another point of view. In response, the possibilities for improvement include (1) reinvigorating our civic associations, (2) developing and inculcating selfcontrol, and (3) demanding higher levels of mutual respect and tolerance in the way we speak to and treat one another.

Civility and Community
The Morality in Our Age Series