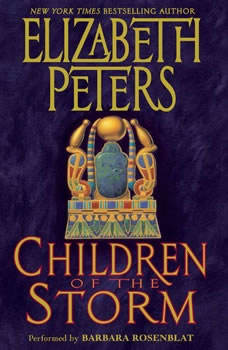 Children of the Storm: An Amelia Peabody Novel of Suspense

The Great War has ended at last. Archaeologist Amelia Peabody and her husband, Emerson, the distinguished Egyptologist, no longer fear for the life of their daring son, Ramses, now free from his dangerous wartime obligations to British Intelligence. Delightful new additions to the growing Emerson family and new wonders waiting to be discovered beneath the shifting Egyptian sands mark a time of new beginnings in Luxor.However, the theft of valuable antiquities from the home of a friend -- including a magnificent gold bracelet adorned with the image of the goddess Hathor -- causes great concern. Ramses's encounter with a woman costumed in the veil and gold crown of Hathor herself only deepens the mystery.With those in her circle suddenly plagued by a series of "accidents," Amelia attempts to connect these troubling threads into a pattern. But her investigation is setting her on a collision course with an adversary more formidable than any she has ever encountered.Performed by Barbara Rosenblat.

Children of the Storm: An Amelia Pe...
The Amelia Peabody series #15