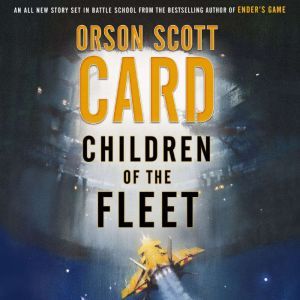 Children of the Fleet

"The ideal presentation of any book of mine is to have excellent actors perform it in audio-only format." — Orson Scott Card"Card's phenomenal emotional depth comes through in the quiet, carefully paced speech of each performer...This is a wonderful way to experience Card's best-known and most celebrated work." — Publisher's Weekly on Ender's GameThis program is read by Stefan Rudnicki and a full cast including Emily Rankin, Kirby Heyborne, Orson Scott Card, P.J. Ochlan, Gabrielle de Cuir, Richard Gilliland, Kristoffer Tabori, and Judy Young. From Orson Scott Card, award-winning and bestselling author of Ender's Game, his first solo Enderverse audiobook in years.Children of the Fleet is a new angle on Card’s bestselling series, telling the story of the Fleet in space, parallel to the story on Earth told in the Ender’s Shadow series.Ender Wiggin won the Third Formic war, ending the alien threat to Earth. Afterwards, all the terraformed Formic worlds were open to settlement by humans, and the International Fleet became the arm of the Ministry of Colonization, run by Hirum Graff. MinCol now runs Fleet School on the old Battle School station, and still recruits very smart kids to train as leaders of colony ships, and colonies. Dabeet Ochoa is a very smart kid. Top of his class in every school. But he doesn’t think he has a chance at Fleet School, because he has no connections to the Fleet. That he knows of. At least until the day that Colonel Graff arrives at his school for an interview.Other Series by Orson Scott CardEnder #1 Ender's Game / #2 Ender in Exile / #3 Speaker for the Dead / #4 Xenocide / #5 Children of the MindEnder's Shadow #1 Ender's Shadow / #2 Shadow of the Hegemon / #3 Shadow Puppets / #4 Shadow of the Giant / #5 Shadows in FlightThe First Formic War (with Aaron Johnston)#1 Earth Unaware / #2 Earth Afire / #3 Earth Awakens