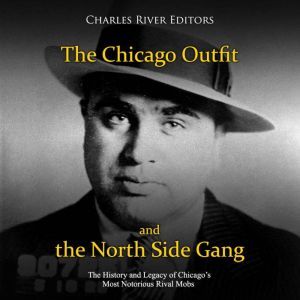 Chicago Outfit and the North Side Gang, The: The History and Legacy of Chicago’s Most Notorious Rival Mobs

20th century Chicago was an ideal breeding ground for organized crime. A buzzing circuit board dotted with towering skyscrapers, brick buildings, worker's cottages, and an eclectic collection of greystone manors, the Windy City was further decked out with electric entertainment districts, the theaters, clubs, brothels, restaurants, and niteries that lined its streets. The city was illuminated by dazzling marquees and light-up signage, and enlivened by the muffled medley of midnight chatter and big band music seeping out of the nightspots. Those who ambled along the boardwalks flanking the Chicago River were greeted by moored commercial fishing boats bobbing in the water, as well as bustling stalls stocked with trout, salmon, and rainbow smelt.

The rise of Chicago’s gangland can be attributed to a number of factors. First, there was the sudden explosion in its population, which saw an influx of immigrants – mainly from eastern and southern Europe, as well as Americans from neighboring and faraway states – teem into the city in search of promising job opportunities and a better life. The abrupt inundation of permanent citizens rendered the already suffering policeman to civilian ratio out of kilter, and the authorities' control of the city became further unzipped. Moreover, children and impressionable youths were regularly exposed to the overwhelming and unblushing presence of organized crime, meaning that the transitions of petty thieves and minor-league thugs to career crooks and full-time gangsters were only natural segues. The privileged pursued politics, medicine, law, and other respectable professions, but the poor folks, set several steps back by their limited resources, turned to crime. Plenty were desperate to feed their families and cheat the unjust system.

In the midst of it all, the Chicago Outfit, one of the longest-running criminal organizations in the land of the free, was perhaps the most notorious of them all. The baleful brotherhood bore a terrifying brand defined by cutthroat competitiveness, sadistic torture tactics, and excessive bloodshed, among scores of other despicable acts. Worse yet, they seemed to be untouchable. Aside from Al Capone himself, there was the vindictive and eerily competent Louis “Little New York” Campagna, a vicious assassin suspected of unloading 59 bullets into a traitorous associate. Then there was Anthony “the Ant” Spilotro, the inspiration for Nicky Santoro, Joe Pesci's character in Martin Scorsese's Casino, who, despite his petite stature, was a barbaric, cruel man with an explosive temper and no capacity for remorse. On top of the infamous M&M Murders, a 25-year-old Spilotro was implicated in the murder of real-estate broker and loan shark Leo Foreman. As if the excruciating blows to the head, ribs, knees, and groin via hammer weren't enough, Foreman was stabbed another 20 times with an ice pick before he was finally relieved of his misery with a bullet to the head. When Foreman's body was eventually recovered in the trunk of a deserted car, it was discovered that “chunks of his body” had been sliced off while he was still breathing.

On February 14, 1929, members of the North Side Gang arrived at a warehouse on North Clark Street in Chicago, only to be approached by several police officers. The officers then marched them outside up against a wall, pulled out submachine guns and shotguns, and gunned them all down on the spot. A famous legend is that one of the shot men, Frank Gusenberg, dying from 14 gunshot wounds, told police that nobody shot him. Though Gusenberg’s statement is probably apocryphal, nobody opened their mouths. Nobody was ever convicted for the “Saint Valentine’s Day Massacre,” the most infamous gangland hit in American history, but it’s an open secret that it was the work of America’s most famous gangster, Al Capone.