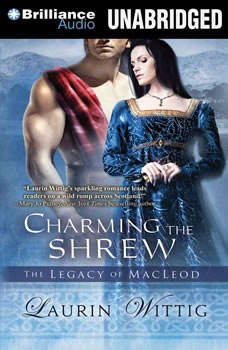 Series: The Legacy of MacLeod Series #1

Returning home to the Scottish Highlands after battling the English, Tayg Munro receives a hero’s welcome—and a shocking ultimatum. In order to take his place as heir to the chiefdom of Culrain, he must choose a wife within the month or have one chosen for him. Angered by his family's decree, Tayg delays the inevitable by volunteering for a mission for the king that takes him deep into the Highlands. Preoccupied by his marital obligation, the brooding warrior sets out with no hint of the fateful encounter that awaits him... Catriona MacLeod is known throughout the Highlands as the Shrew of Assynt, thanks to her razor-sharp tongue and her unwillingness to yield to her five brothers. When she's told that her eldest brother has promised her hand in marriage to a man she has good reason to hate, she flees into the Scottish wilderness, determined to seek the king’s intervention in her plight. When she reluctantly joins forces with a handsome traveler, she cannot anticipate the treacherous plot that will soon embroil them—nor the passion that will ignite between them.

Based on the phenomenal growth of Quinn's popularity, and her four-week stint on the New York Times bestseller list with Romancing Mr Bridgerton, it's the perfect time to revisit Ms Quinn's 'splendid' storytelling.American heiress Emma Dunster has ...