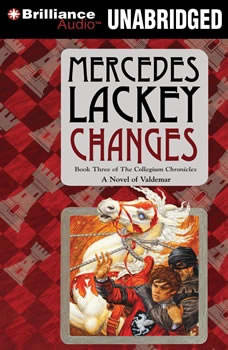 Mags was a Trainee in the Heraldic Collegium in Haven, Valdemar’s capital city. Though his background of poverty and abuse at Cole Pieters’ gem mine set him apart from most other trainees, nonetheless he had found his own group of friends. Bear, Lena, and Amily were all students whose situations in life set them apart from more usual Trainees. The four of them had found mutual support in their shared misfortunes, and together struggled to help one another find solutions to their individual problems.But Mags’ friendship with Amily brought him to the attention of the King’s Own. The seemingly immortal Companion Rolan had Chosen Nikolas to suit the specific needs of the current monarch, and those needs were for an agent who could collect information surreptitiously. Nikolas recognized the same traits in Mags that Rolan had recognized in him and because of Mags’ friendship with Amily, no one would think twice about seeing her overprotective father spending time with Amily’s “suitor.”So Mags began training as Nikolas’ partner. They worked in disguise at night with Mags as Nikolas’s deaf and mute helper, where his extensive knowledge of gems—especially his skill at separating the real from the fake—would be an added benefit. Hiding in the shadows behind the desk, pretending to neither hear nor speak, Mags could better “observe” the clients, and even the surrounding neighborhood. And Nikolas could send him out on “errands” to chase down leads.But this new job was far more dangerous than Mags had ever considered. For there were mysterious agents in the city—agents who sought to bring down the kingdom, and no one knew where they came from or who they worked for. They were smart, talented, and preternaturally fast. And most of all they were willing to do anything—anything—to bring Valdemar to ruin.