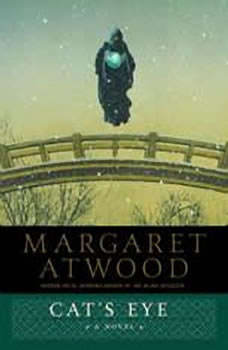 From the Booker Prize-winning author of The Blind Assassin comes a breathtaking novel about a woman grappling with the tangled knot of her life. Disturbing, hilarious, and compassionate, Cat’s Eye is the story of Elaine Risley, a controversial painter who returns to Toronto, the city of her youth, for a retrospective of her art. Engulfed by vivid images of the past, she reminisces about a trio of girls who initiated her into the fierce politics of childhood and its secret world of friendship, longing, and betrayal. Elaine must come to terms with her own identity as a daughter, a lover, an artist, and a woman—but above all she must seek release from her haunting memories.

Although a bit melancholy at times, Atwood's tale of an artist returning to her 'hometown' of Toronto for a retrospective of her art career (and a retrospective of her formative years) is thoroughly engrossing. The description of the art scene in the 60's and the gentrification of Toronto are wonderful as are the descriptions of her paintings. The childhood drama of acceptance is dead-on. Makes me eager to read more of Margaret Atwood's novels