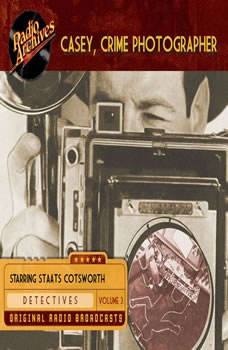 The origins of Jack 'Flashgun' Casey can be traced to the 1930s detective pulp magazine 'Black Mask'; the hard-boiled photojournalist was introduced in the March 1934 issue by former newspaperman/ad exec George Harmon Coxe. So radio audiences received a formal introduction to Coxe's creation over CBS Radio beginning July 7, 1943. The series was originally titled 'Flashgun Casey', but during its run it was also referred to as 'Casey, Press Photographer', 'Crime Photographer', and 'Casey, Crime Photographer'. Casey snapped photos for the fictitious Morning Express, and often found himself cast in the role of amateur sleuth by getting involved in the stories he covered. Many of the plots had him stumbling across a clue in a photo he had taken (something the police had overlooked), and with the help of fellow reporter and romantic interest Annie Williams, they would inevitably bring the culprit(s) to justice. What set 'Casey, Crime Photographer' apart from its radio crime drama competiton was its laid-ba