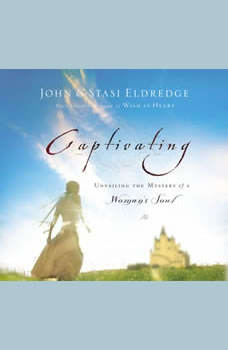 Captivating: Unveiling the Mystery of a Woman's Soul

Every little girl has dreams of being swept up into a great adventure, of being the beautiful princess. Sadly, when women grow up, they are often swept up into a life filled merely with duty and demands. Many Christian women are tired, struggling under the weight of the pressure to be a "good servant," a nurturing caregiver, or a capable home manager.

What Wild at Heart did for men, Captivating is doing for women. Setting their hearts free. This groundbreaking book shows readers the glorious design of women before the fall, describes how the feminine heart can be restored, and casts a vision for the power, freedom, and beauty of a woman released to be all she was meant to be. By revealing the core desires every woman shares-to be romanced, to play an irreplaceable role in a grand adventure, and to unveil beauty-John and Stasi Eldredge invite women to recover their feminine hearts, created in the image of an intimate and passionate God. Further, they encourage men to discover the secret of a woman's soul and to delight in the beauty and strength women were created to offer.

After decades of failed relationships and painful drama, Donald Miller decided he’d had enough. Impressing people wasn’t helping him connect with anyone. He’d built a life of public isolation, yet he dreamed of meaningful relations...

Walking with God through Pain and Suffering
by Timothy Keller

New York Times bestselling author Timothy Keller—whose books have sold millions of copies to both religious and secular readers—explores one of the most difficult questions we must answer in our lives: Why is there pain and suffering?Wal...