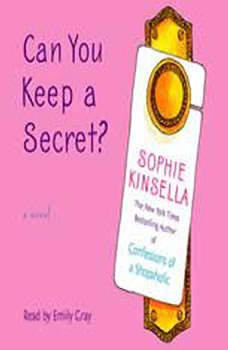 Can You Keep a Secret?

SOON TO BE A MAJOR MOTION PICTURE • From #1 New York Times bestselling author Sophie Kinsella, a novel with the same wicked humor, buoyant charm, and optimism as her beloved Shopaholic series.

Meet Emma Corrigan, a young woman with a huge heart, an irrepressible spirit, and a few little secrets:

Secrets from her boyfriend: I’ve always thought Connor looks a bit like Ken. As in Barbie and Ken.

Secrets from her mother: I lost my virginity in the spare bedroom with Danny Nussbaum while Mum and Dad were downstairs watching Ben-Hur.

Secrets she wouldn’t share with anyone in the world: I have no idea what NATO stands for. Or even what it is.

Until she spills them all to a handsome stranger on a plane. At least, she thought he was a stranger. . . .

But come Monday morning, Emma’s office is abuzz about the arrival of Jack Harper, the company’s elusive CEO.  Suddenly Emma is face-to-face with the stranger from the plane, a man who knows every single humiliating detail about her. Things couldn’t possibly get worse. Or could they?

Praise for Can You Keep a Secret?

“Venturing beyond Saks and Barney’s, the bestselling author of Confessions of a Shopaholic and Shopaholic Ties the Knot entertains readers with backstabbing office shenanigans, competition, scandal, love and sex. . . . Kinsella’s down-to-earth protagonist is sure to have readers sympathizing and doubled over in laughter.”—Publishers Weekly

“If laughing out loud in public places is your bag, be sure to pick up [Can You Keep a Secret?]. Heroine Emma Corrigan is going to be your new best friend.”—Boston Herald

“Kinsella’s timing is so perfect, her instincts so spot-on, that it’s easy to . . . devour the book like the guilty pleasure it is.”—Miami Herald

“Chick lit at its lightest and breeziest . . . filled with fabulous clothes, stalwart friends, and snotty enemies waiting to be taken down a peg.”—Orlando Sentinel

“[Kinsella’s] dialogue is sharp, even her minor characters are well drawn, and her parody of the marketing world is very funny.”—Washington Post Book World

Sundays at Tiffany's
by James Patterson

As a little girl, Jane has no one. Her mother Vivienne Margaux, the powerful head of a major New York theater company has no time for her. But she does have one friend--Michael--and no one can see him but her. But Michael can't stay with Jane for...

good plot twists on this one... and not your typical thing that you think's going to happen, which is nice. Good romance story though.

I thought this book was very funny and an excellent romance.

This is one of my favorite books!!! It is so funny and easy to read. I laughed out loud, which is why I'm sure my neighbors think I'm crazy, as I was all alone at the time.

i like to read chick lit sometimes, and sophie the author of the shopaholic series is one of the best for this genre. an interesting, funny, fast read about a woman who talked too much and could have gotten herself into trouble, but instead gets herself into real life.

I like Sophie Kinsella and her books always seem to keep me laughing. There are times when the characters can get a big grating, but then you tend to realize that as in real life, not everyone is perfect and it puts you back on track. This is a great read for anyone who needs to laugh out loud and escape for just a few hours.