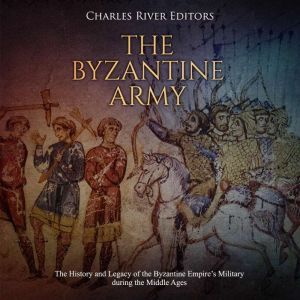 Byzantine Army, The: The History and Legacy of the Byzantine Empire’s Military during the Middle Ages

It would be hard if not outright impossible to overstate the impact Roman Emperor Constantine I had on the history of Christianity, Ancient Rome, and Europe as a whole. Best known as Constantine the Great, the kind of moniker only earned by rulers who have distinguished themselves in battle and conquest, Constantine remains an influential and controversial figure to this day. He achieved enduring fame by being the first Roman emperor to personally convert to Christianity, and for his notorious Edict of Milan, the imperial decree which legalized the worship of Christ and promoted religious freedom throughout the Empire. More than 1500 years after Constantine’s death, Abdu'l-Baha, the head of the Baha'i Faith, wrote, “His blessed name shines out across the dawn of history like the morning star, and his rank and fame among the world's noblest and most highly civilized is still on the tongues of Christians of all denominations”

However, it can be argued that despite his military successes – the most notable of which occurred fighting for supremacy against other Romans – Constantine may well have set the stage for the ultimate collapse of the Roman Empire as it had existed up until that point. It was Constantine who first decided that Rome, exposed and vulnerable near the gathering masses of barbarians moving into Germania and Gaul, was a strategically unsafe base for the Empire, and thus expanded the city of New Rome on the Dardanelles straits, creating what eventually became Constantinople. By moving the political, administrative and military capital of the Empire from Rome to the East, as well as the Imperial court with all its attendant followers, Constantine laid the groundwork for the eventual schism which saw the two parts of the Roman Empire become two entirely separate entities, go their own way, and eventually collapse piecemeal under repeated waves of invasion.

As a result, the Byzantine Empire was the heir to two great cultures that cradled and nurtured European civilization: Greece and Rome. Constantinople, now called Istanbul, became a center of power, culture, trade, and technology poised on the edges of Europe and Asia, and its influence was felt not only throughout Europe but the Middle East, Africa, Central Asia, and the Far East. Coins dating from the reign of Emperor Justinian I (r.527-565) have been found in southern India, and Chinese records show that the “Fulin,” as the Chinese named the Byzantines, were received at court as early as 643 CE. For a thousand years, the Byzantine Empire protected Europe from the Islamic Arab Empire, allowing it to pursue its own destiny. Finally, Byzantium was a polyglot society in which a multitude of ethnic groups lived under the emperor prizing peace above war, an inspiration surely for the modern age when divisive nationalism threatens to dominate society once more.

The end of the Byzantine Empire had a profound effect not only on the Middle East but Europe as well. Constantinople had played a crucial part in the Crusades, and the fall of the Byzantines meant that the Ottomans now shared a border with Europe. The Islamic empire was viewed as a threat by the predominantly Christian continent to their west, and it took little time for different European nations to start clashing with the powerful Turks. In fact, the Ottomans would clash with Russians, Austrians, Venetians, Polish, and more before collapsing as a result of World War I, when they were part of the Central powers.

The Ottoman conquest of Constantinople also played a decisive role in fostering the Renaissance in Western Europe. The Byzantine Empire’s influence had helped ensure that it was the custodian of various ancient texts, most notably from the ancient Greeks, and when Constantinople fell, Byzantine refugees flocked west to seek refuge in Europe.