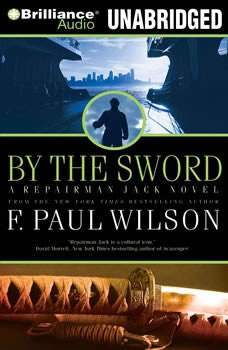 By the Sword: A Repairman Jack novel

Jack is back, tangled in a battle to retrieve a stolen Japanese katana, the fabled Gaijin Masamune. Half a century ago, this legendary blade disappeared from the Hiroshima Peace Museum. Now the sword has been taken from the son of the original thief, who naturally turns to all-around fix-it man and reluctant hero, Repairman Jack. Jack soon finds that it’s more than just everyday thieves who want the sword – so do his own enemies. Plagued by recurring dreams about the blade, Kicker leader Hank Thompson vows to have it. A Kaze Group chairman covets the weapon for his private collection and sends Hideo Takita to claim it. The fanatical Kakureta Kao cult will kill to possess it. And, above all, there’s the mysterious thief, who shows no sign of being willing to give up the katana. Following his usual MO of “Let’s you and him fight,” Jack maneuvers all sides into a bloody melee from which he plans to waltz away with the fabled sword. Of course, things never go as planned.