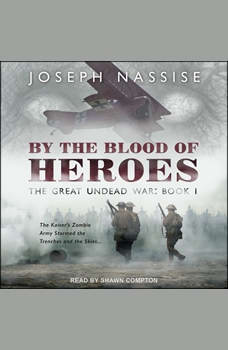 By The Blood of Heroes

At the end of 1917, the increasingly desperate Germans introduce a new gas to the battlefield: T-Leiche-"corpse gas" - that radically alters the face of the war. Unlike other chemical weapons that attack the living, T-Leiche resurrects the bodies of the dead, giving the enemy an almost unlimited, if not quite fresh, source of troops.

When legendary Allied pilot and war poster-boy Major Jack Freeman is shot down and taken captive by the Germans, veteran Captain Michael "Madman" Burke is the only man fearless and wild enough to try to rescue the American Ace. With a small squad of heroes - his right-hand man Sergeant Moore, Clayton Manning, the filthy rich big-game hunter turned soldier, and professor Dan Richards, Tesla protege and the resident authority on all things supernatural - Burke must traverse the putrid ground of no man's land to infiltrate the enemy's lines.

Using an experimental dirigible, the team penetrates enemy lines to face incredible danger and find risk and peril at every turn, including ruthless traitor smugglers and marauding bands of the Kaiser's undead. But only when they arrive at the prison camp is the true importance of their mission unveiled. Now, they just have to get back to their own trenches - if they can stay undead, that is.