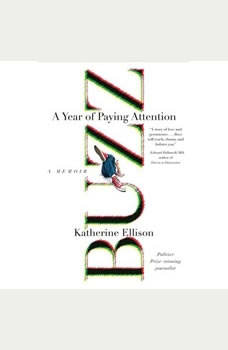 Buzz: A Year of Paying Attention

"An absorbing, sharply observed memoir."-Kirkus ReviewsA hilarious and heartrending account of one mother's journey to understand and reconnect with her high-spirited preteen son-a true story sure to beguile parents grappling with a child's bewildering behavior.Popular literature is filled with the stories of self-sacrificing mothers bravely tending to their challenging children. Katherine Ellison offers a different kind of tale. Shortly after Ellison, an award-winning investigative reporter, and her twelve-year-old son, Buzz, were both diagnosed with attention deficit/hyperactivity disorder, she found herself making such a hash of parenting that the two of them faced three alternatives: he'd go to boarding school; she'd go AWOL; or they'd make it their full-time job to work out their problems together. They decided to search for a solution while Ellison investigated what genuine relief, if any, might be found in the confusing array of goods sold by the modern mental health industry.The number of diagnoses for childhood attention and behavior issues is exploding, leaving parents and educators on a confusing chase to find the best kind of help for each child. Buzz, a page-turner of a memoir, brings much relief. It is immensely engaging, laugh-out-loud funny, and honest-and packed with helpful insights.

ADD-Friendly Ways to Organize Your Life
by Judith Kolberg

Acclaimed professional organizer Judith Kolberg and Dr. Kathleen Nadeau, renowned ADHD clinical psychologist, are back with an updated edition of their classic text for adults with ADD. Their collaboration offers the best understanding and solutions...

Faster Than Normal
by Peter Shankman

A refreshingly practical and honest guide that rewrites the script on ADHDPeter Shankman is a busy guy -- a media entrepreneur who runs several businesses, gives keynote speeches around the world, hosts a popular podcast, runs marathons and Iron Man...

In 1994, Driven to Distraction sparked a revolution in our understanding of attention deficit disorder. Widely recognized as the classic in the field, the book has sold more than a million copies. Now a second revolution is under way in the approach...

For adults with ADHD, problems with attention, planning, problem solving, and controlling emotions can make daily life an uphill battle. Fortunately, effective help is out there. No one is a better guide to how to get the best care—and what su...

Every year, millions of withdrawn little girls and chronically overwhelmed women go undiagnosed with Attention Deficit Disorder because they don't fit the stereotypical profile: they're not fast-talking, hyperactive, or inattentive, and they are not...

“If you read only one book about attention deficit disorder, it should be Delivered from Distraction.”—Michael Thompson, Ph.D., New York Times bestselling co-author of Raising CainIn 1994, Driven to Distraction sparked a revolution...

Beyond ADHD
by Jeff Emmerson

Beyond ADHD weaves Jeff Emmerson's personal story of his ADHD diagnosis, exploring along the way the latest medical, scientific, and societal explanations and tools for managing and living with the condition. Including interviews with a number of ex...

A groundbreaking and definitive account of the widespread misdiagnosis of Attention Deficit Hyperactivity Disorder - and its serious effects on children, adults, and society. More than one in seven American children are getting diagnosed with Att...

All-New Revised EditionAttention deficit disorder (ADD) is a national health crisis that continues to grow—yet it remains one of the most misunderstood and incorrectly treated illnesses today. Neuropsychiatrist Daniel G. Amen, MD was one of th...