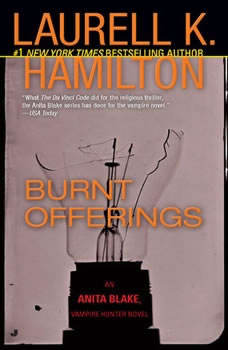 Anita Blake is a vampire hunter. But when someone else sets his sights on her prey, she must save them both from the inferno.

an anita blake novel. since ive been reading them out of order, it was good to get more back story (well, back for me) on the whole warewolf part. very good book.

This is probably the last book of this series I would read. I have read them all and they were disappointments for me. In this one, Anita is still a character you like. In later novels in this series, she just seems like a conceited ****, as in having sex just to have it, with no benefit to the plotlines, such as they are in later books.

I'm enjoying the Anita Blake series. I've read the descriptions of the future plots and I’m not sure I like where it’s going, but I’ll keep reading them, for now. I’m always curious when Anita sleeps or goes potty, and this one addressed a few hours of nap time. It seems that Anita gains a new power each book that allows her to foil the latest monsters. There won’t be many super old vampires left and maybe that’s Jean-Claude’s master plan. I was disappointed that Richard was so cruel.