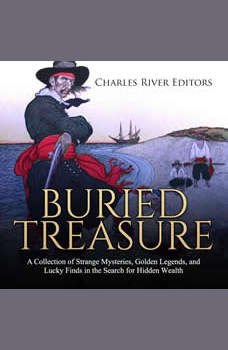 Buried Treasure: A Collection of Strange Mysteries, Golden Legends, and Lucky Finds in the Search for Hidden Wealth

When Robert Louis Stevenson published Treasure Island in the late 19th century, it all but created every stereotype now associated with pirates. The book is a coming of age adventure that mixes character studies, action, a vivid setting, and commentary on the ambiguity of morality, as embodied by the memorable Long John Silver. Its influence on the popularity of historical pirates is unmistakable, with its inclusion of treasure maps where X marks the spot, schooners, tropical islands, and one-legged pirates with parrots on their shoulders.

Of course, Stevenson’s work and the public’s fascination with pirates were hardly new phenomena. After all, people had heard tales of hidden booty and gold for centuries, from rumors about Blackbeard and Captain William Kidd to stories about outlaws and criminals burying their booty to come back for it at a later date. It was only fitting that Stevenson’s work came in the same era that people across the world were panning the earth for mineral resources, most notably the California Gold Rush in the late 1840s.

As this all suggests, there’s something about buried treasure that catches someone’s attention like few other things. As soon as there’s the potential for uncovering hidden wealth, otherwise sane and reliable people will abandon their homes and regular lives and become obsessed with tracking down the treasure.