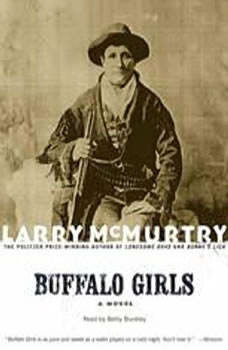 In a letter to her daughter back East, Martha Jane is not shy about her own importance: "Martha Jane -- better known as Calamity -- is just one of the handful of aging legends who travel to London as part of Buffalo Bill Cody's Wild West Show in Buffalo Girls. As he describes the insatiable curiosity of Calamity's Indian friend No Ears, Annie Oakley's shooting match with Lord Windhouveren, and other highlights of the tour, McMurtry turns the story of a band of hardy, irrepressible survivors into an unforgettable portrait of love, fellowship, dreams, and heartbreak.