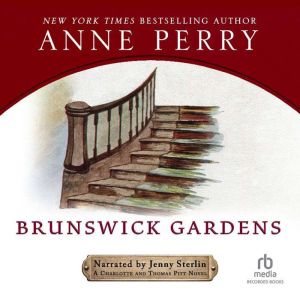 Like the great Victorian novelists whose mantle she wears with such distinction, Anne Perry creates a rich and intimate world and fills it with remarkably vivid characters who experience the majesty--and shame--of the British Empire at its brilliant zenith. Now, in Brunswick Gardens, she explores the controversial birth of a philosophy that enflamed fiery debate--and possibly murder. A century ago, Charles Darwin's revolutionary theory of evolution rocked the civilized world, and the outraged Anglican church went on the warpath against it. In a mansion in London's affluent Brunswick Gardens, the battle is intense, as that most respected clergyman, the Reverend Ramsay Parmenter, is boldly challenged by his beautiful assistant, Unity Bellwood--a "new woman" whose feminism and aggressive Darwinism he finds appalling. When Unity, three months pregnant, tumbles down the Parmenter staircase to her death, Thomas Pitt, commander of the Bow Street police station, is virtually certain that one of the three deeply devout men in the house committed murder. Could it have been the Reverend Parmenter, his handsome curate, or his Roman Catholic son? Powerful forces demand that the scandalous matter be cleared up immediately. But Pitt and his clever wife, Charlotte, refuse to settle for less than the truth . . . and justice. Like all Anne Perry's novels, Brunswick Gardens translates great moral issues into deeply moving human dramas. Perhaps the most psychologically penetrating book she has written, it is a distinguished addition to her acclaimed body of work. 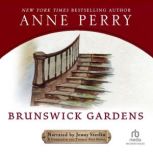