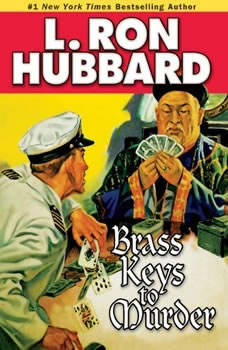 U.S. Navy Lieutenant Steve Craig is in one hell of a mess. Being accused of murder is bad enough, but the local police are convinced he?s killed his own father. Alfred Hitchcock couldn?t have conceived a more diabolical plot for Cary Grant . . . and now, for Steve Craig, the plot is about to get down and dirty. Steve?s safe from the cops as long as he stays aboard his Navy ship?but the word safe isn?t in his vocabulary. He slips off the vessel and vanishes into the seamy underside of the city, determined to find out who took his father?s life . . . even if it means risking his own. He follows a trail of smoke and mirrors and sudden violence to the Brass Keys to Murder. With them, Steve will seek to unlock the terrible truth behind his father?s death . . . and an astonishing secret that will change his life?and that of the woman he loves?forever. The foghorn sounds, gunfire erupts, and screams pierce the night as the audio drama of Brass Keys to Murder opens up a Pandora?s Box of mystery, danger and suspense. Ron knew well the life at sea and the world surrounding it. Not only was he the son of a naval officer, he traveled back and forth across the Pacific, plied the China coast in a working schooner and commanded an expedition aboard a four-masted ship to the Caribbean. He walked the waterfronts of countless ports, sharing stories with the colorful?and often shady?characters inhabiting them. Originally published in April 1935 under the pen name Michael Keith, Brass Keys to Murder is a direct result of those adventures. Cast: Jim Meskimen, Bob Caso, Beth Leckbee and Josh R. Thompson

Brass Keys to Murder
Stories from the Golden Age