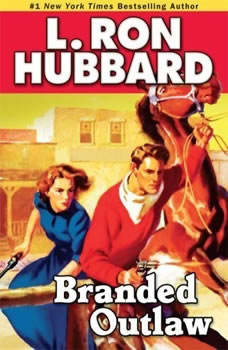 Take the law into your own hands, and you risk losing your grip on everything else?including your life. Lee Weston?a young Paul Newman with a Colt revolver at his hip?is as good-looking as he is quick tempered, and he?s got a lot to be angry about. His father murdered, his family ranch torched, he goes gunning for Harvey Dodge?the man who he?s convinced is the killer?and it?s Lee who ends up on the wrong side of the law. Shot in a gunfight, on the run and running out of time, he holes up in a mountain hideout and waits for death to come find him. But he wakes up in the arms of a beautiful woman who has beat death to his door and nursed him back to life. She?s the first and only woman he has ever fallen for, and her name is Ellen Dodge?Harvey?s daughter. Can a great loss lead to a great love? Can the search for revenge lead to redemption? The answers lie in the wild heart of the Wild West?in Branded Outlaw. Kick up some dust and gun smoke as the audio drama of Branded Outlaw takes you on a hard and bloody ride to the western frontier. L. Ron Hubbard was so prolific, and his stories so much in demand, he occasionally had to publish under a pseudonym to ensure that his name wouldn?t appear twice in a single issue of a magazine. Thus did Branded Outlaw originally appear as being written by a writer named Barry Randolph. But as is clear from the action and authenticity of the story, it was Hubbard behind the curtain pulling the levers. This is one of sixteen westerns Hubbard wrote in 1938?all influenced by a foray into New Mexico to round out his research. His unsurpassed knowledge of the West originated in his years growing up?and riding on?the range. Cast: Bob Caso, Jim Meskimen, David O'Donnell and Tamra Meskimen