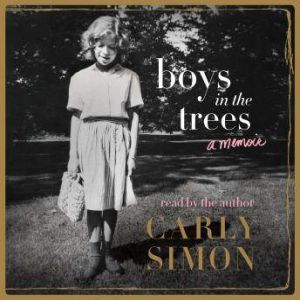 Boys in the Trees: A Memoir

Simon's memoir reveals her remarkable life, beginning with her storied childhood as the third daughter of Richard L. Simon, the co-founder of publishing giant Simon & Schuster, her musical debut as half of The Simon Sisters performing folk songs with her sister Lucy in Greenwich Village, to a meteoric solo career that would result in 13 top 40 hits, including the #1 song "You're So Vain." She was the first artist in history to win a Grammy Award, an Academy Award and a Golden Globe Award, for her song "Let the River Run" from the movie Working Girl. The memoir recalls a childhood enriched by music and culture, but also one shrouded in secrets that would eventually tear her family apart. Simon brilliantly captures moments of creative inspiration, the sparks of songs, and the stories behind writing "Anticipation" and "We Have No Secrets" among many others. Romantic entanglements with some of the most famous men of the day fueled her confessional lyrics, as well as the unraveling of her storybook marriage to James Taylor.Includes original music composed especially for the program by Carly Simon and Teese Gohl, plus a previously unreleased bonus song from Carly Simon. CARLY SIMON lives on Martha’s Vineyard. www.carlysimon.com

This audio book was so good I listened to it twice! I hope Carly writes another book to share her life beyond James Taylor. I was disappointed that she ended it there. I was hoping to hear about her being a breast cancer survivor and finding out her second husband was gay. She has so much more to tell....