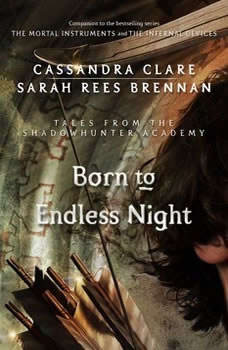 Series: Tales from the Shadowhunter Academy #9

What happens when Magnus Bane brings a baby home to his boyfriend Alec Lightwood? One of ten adventures in Tales from the Shadowhunter Academy.After a warlock baby is abandoned on the steps of the Academy, Magnus Bane rescues the child—and brings him home to his boyfriend, Alec. This standalone e-only short story follows the adventures of Simon Lewis, star of the #1 New York Times bestselling series, The Mortal Instruments, as he trains to become a Shadowhunter. Tales from the Shadowhunter Academy features characters from Cassandra Clare’s Mortal Instruments, Infernal Devices, and the upcoming Dark Artifices and Last Hours series. Born to Endless Night is written by Cassandra Clare and Sarah Rees Brennan. Read more of Cassandra Clare’s Shadowhunter Chronicles in The Infernal Devices, The Mortal Instruments, and The Bane Chronicles.

Born to Endless Night
Tales from the Shadowhunter Academy...