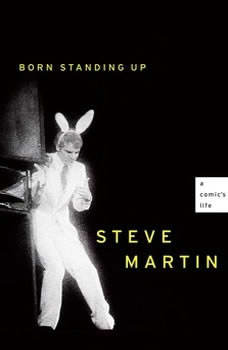 Born Standing Up: A Comic's Life

The Emmy and Grammy Award-winner's candid, spectacularly amusing memoir of his years in stand-up In the mid-seventies, Steve Martin exploded onto the comedy scene. By 1978 he was the biggest concert draw in the history of stand-up. In 1981 he quit forever. Born Standing Up is, in his own words, the story of "why I did stand-up and why I walked away." At age ten Martin started his career at Disneyland, selling guidebooks in the newly opened theme park. In the decade that followed, he worked in the Disney magic shop and the Bird Cage Theatre at Knott's Berry Farm, performing his first magic/comedy act a dozen times a week. The story of these years, during which he practiced and honed his craft, is moving and revelatory. Martin illuminates the sacrifice, discipline and originality that made him an icon and informs his work to this day. To be this good, to perform so frequently, was isolating and lonely. It took Martin decades to reconnect with his parents and sister, and he tells that story with great tenderness. Martin also paints a portrait of his times: the era of free love and protests against the war in Vietnam, the heady irreverence of The Smothers Brothers Comedy Hour in the late sixties, and the transformative new voice of Saturday Night Live in the seventies.

Until I read the synopsis of this book and then listened to Martin reading the opening lines of it, it hadn't occurred to me that it had been so long since he gave up stand-up comedy and became a more-or-less serious actor. I used to love Martin's attacks of Happy Feet, the King Tut performances, and his one-liners, like excuuuuse-me and others. Listening to this book and hearing the serious side of Martin, I found I was interested in his life story, but at the same time, I didn't really care about it. Hearing how much work went into his act and that he wasn't really enjoying his own insanity on stage, sorta took away from my joy of listening to him tell about it, so I rated the book with only 3-stars. Nonetheless, the book is not obnoxious in manner and Martin reads it well so that you forget he's reading it, and I loved the few instances where he sang or recited excerpts from his act that I used to enjoy so much.