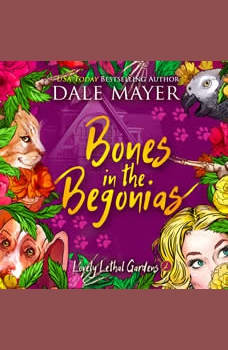 Doreen Montgomery’s new life in Kelowna was supposed to be a fresh start after a nasty split from her husband of fourteen years, plus a chance to get her bearings and her life back on track. Instead her first week in her new hometown was spent digging up dead bodies, chasing clues, and getting in Corporal Mack Moreau’s way.

But now that the old cold case has been solved, and the murderer brought to justice, Doreen believes things might go her way this week. When Mack hires her to whip his mother’s garden into shape, it seems like a second chance, both for Doreen’s new beginning in Kelowna and for her budding relationship with Mack.

But, instead of digging up Mrs. Moreau’s struggling begonias and planting them in a better location, Doreen discovers another set of bones … and another mystery to solve. As the clues pile up, Mack makes it abundantly clear that he doesn’t want or need her help, but Doreen can’t resist the lure of another whodunit. As she and Mack butt heads and chase red herrings, Doreen’s grandmother, Nan, sets odds and places bets on who solves the crime first.

All while a murderer is watching …