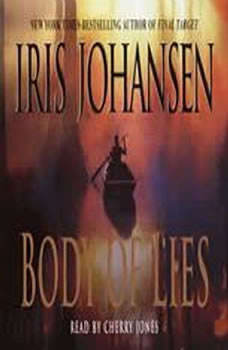 From Iris Johansen, the New York Times bestselling author of The Search and Final Target, comes a taut, fast-paced, and terrifying psychological thriller that pushes the level of suspense to the absolute limit–and beyond. This time forensic sculptor Eve Duncan finds herself matched against a killer who will challenge her skill, test her courage, and threaten her family.

As a forensic sculptor, Eve Duncan deals in death every day of her life. It’s her job. And while it might seem macabre to some, Eve knows from personal experience that her work, giving a face and a name to the victims of violent death, helps bring closure to their families. Now that job is about to put not only her own life on the line...but the lives of everyone close to her.

It begins with a call from a high-ranking government official. He wants Eve to drop everything and come to Baton Rouge to identify the remains of an unknown murder victim. At first, Eve wants nothing to do with the project. She has finally found peace from her own tragic past, living a quiet life in a small lakeside cottage with Atlanta detective Joe Quinn and her adopted daughter, Jane. But a stunning series of seemingly unrelated events is about to upset all that.

Suddenly, Eve’s hard-won new world is turned upside down, and she flees to Baton Rouge to take on the project of identifying the skeleton. Forced to work in secrecy, given only the sketchiest of information, Eve can’t help but wonder if the high-level security that surrounds her is meant to protect her–or imprison her.

She hasn’t even begun work on the reconstruction when the first death occurs. Someone totally ruthless, someone who can strike anywhere at any time, and with seeming immunity, is determined to put a halt to her work. Soon the questions–and the threats to her own life–begin to mount as Eve realizes she has stumbled into the heart of a chilling conspiracy.

There is only one person who can give her the answers she needs. And that is the dead man himself. To survive, Eve must put her life on the line to uncover the deadly secret of his identity and learn the devastating truth buried beneath a body of lies.